Love is in the air, and despite Facebook‘s batting its eyes at daters with the release of Facebook Dating, my crush is still on Match Group (NASDAQ:MTCH). While the 12% drop in its stock in the first week following the Sept. 5 launch of Facebook Dating isn’t ideal, I’m still a fan and here’s why.

In April, the company announced several key changes in leadership positions, particularly in Asian markets. Promoting from within, Match Group is in some cases taking proven performers in smaller markets and calling them up to the big leagues.

While piggybacking on proven success is a solid move, there’s a bigger takeaway here. Match Group clearly understands the importance of global expansion in this industry and is committed to taking bold moves to get there. The company says nearly half of its revenue comes from places outside the U.S. and Canada and it’s aiming for a quarter of revenue to come from Asia in five years. The new executive appointments show there is no complacency in Match Group’s efforts to gain market share internationally. 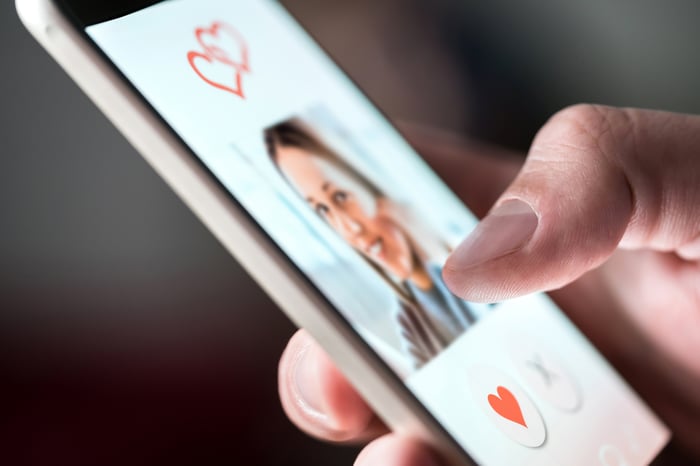 While these numbers are impressive, the most appealing to me were year-over-year increases in international traction.

Coupling these numbers with the targeted leadership restructuring, you’ve made a believer out of me that the international expansion will succeed.

Why does this matter so much? According to Allied Market Research, the online dating services market will grow to $9.2 billion by 2025 from its 2018 mark of $6.69 billion, that’s a compound annual growth rate of 4.7%. The fastest-growing region mentioned was the Asia-Pacific region, with a CAGR of 5.6%. Statista research shows revenue in the Indian online dating market will grow from $54 million to $76 million between 2019 and 2023. In Japan, the market is expected to grow at a CAGR of 6.5% to $61 million by 2023.

In other words, there are a lot of lonely people out there around the world looking for digital help finding love.

Match Group has a recipe for success internationally and a current foothold that will be challenging to upend. I expect continued growth over the next few years as the company continues to focus internationally. Facebook Dating will have an impact, but I don’t expect it to be as impactful as others might think.