I recently came across articles about Match Group (NASDAQ:MTCH) on Seeking Alpha and was immediately intrigued about the characteristics of this company. We all know Tinder, but I have discovered that this company can be very solid and compelling to investors.

Match Group has a three year annualized revenue growth rate of 23.9% and net margins have steadily increased from 13% in 2015 to 27% in 2018. When I see this, I immediately get interested, because these are the signs of a platform company profiting from operating leverage. Let’s have a look as to whether this can be an attractive investment.

Match Group is essentially a portfolio of dating sites and apps. Each app/site targets different kinds of target audiences. Match.com is the site where the group derives its name from and was launched in 1995. The main portfolio now consists of Tinder, Match, Plenty of Fish, Meetic, OkCupid, OurTime, Pairs and Hinge. Tinder was launched internally by Match Group in 2012, but the strategy of the group is to acquire competitive brands when they start to get successful. For example, Hinge was acquired in 2018 and Pairs and Plenty of Fish were acquired in 2015. Although, per the end of 2018, Tinder was 48% of total revenue, I do like management’s willingness to spot dating trends worldwide and act on it accordingly.

For example, the newest company they invested in is Harmonica, an app that is based in Egypt and addresses the Muslim community. It provides a new way to serve 33 countries in Asia that are predominantly Muslim.

The original business model for Match.com was to subscribe in order to see the profiles of other people, but with the advent of Tinder, the company innovated very smartly. Tinder is free to use, but you need to take a subscription in order to benefit from special features. For example with Tinder Plus, launched in 2015, you get the ability to “swipe” unlimited, review profiles worldwide and the ability to have a 30 minute boost per month. If you use a boost, that means your profile will appear higher in a user’s search results.

In a way this is similar to how Alibaba or eBay charges merchants to appear higher in search results when a search matches the merchant’s products. In that sense, Match Group can be seen as a marketplace business.

As recently as 2017, the company introduced Tinder Gold, which is all the above features plus the option to know who liked you. This option is also very popular on LinkedIn, where you can see which people viewed your profile. LinkedIn is actually another platform that resembles Tinder, instead that you don’t search for job employees, but a suitable date. LinkedIn had great success with their business model and was later acquired by Microsoft (NASDAQ:MSFT).

Summarized in the graph below are the different monetization methods. What is also interesting to note is that these features can be accessed through a subscription, but also a-la-carte. The company states that the majority of a-la-carte users are also subscribers. 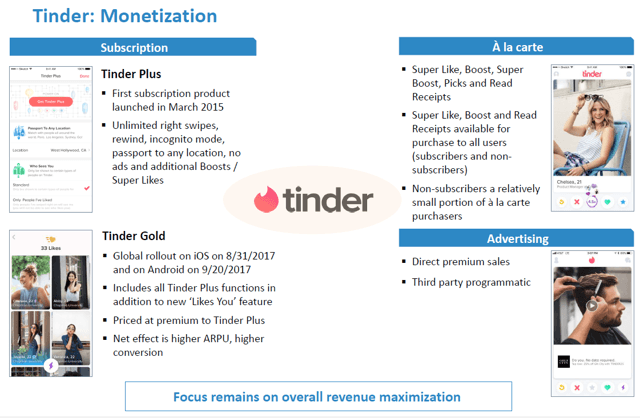 I personally feel that there is a good management team that has successfully monetized Tinder with Tinder Plus (2015) and Tinder Gold (2017) and will continue this in the future.

One of the big positive drivers in recent years is that the online dating stigma eroded and online dating is now the #1 method in the U.S. to find a date. As a matter of fact, according to a Stanford paper published this year, 39% of heterosexual couples have met through online dating. This has experienced immense growth as this number was 20% in 2010. Who knows this number can grow even more, as more busy lives minimize the chances of meeting people face-to-face.

Secondly, what I like very much is that the total addressable market is just huge. Joint research from the World Bank, Research Now and Eurostat shows that globally there are 600 million unattached singles (ex China) with internet/smartphone access. That’s a lot of people. Match Group had 9.1 million subscribers in Q2 2019, which is about 1.51% of the total addressable market. This clearly outlines the breadth of the runway ahead. Not every online dater will be a subscriber, but they have the potential to be.

Much growth is projected for international markets (now at 47% of total revenue) because stigmas are starting to erode there as well. Also, 75% of all global singles live in the emerging market regions, so this is still an immense untapped market.

Management has stated that many international markets are only just at the point where the U.S. and European markets were in 2012. And then again, even in the U.S. 61% of singles have never used a dating product, so even in the home market significant runway remains. (see below) 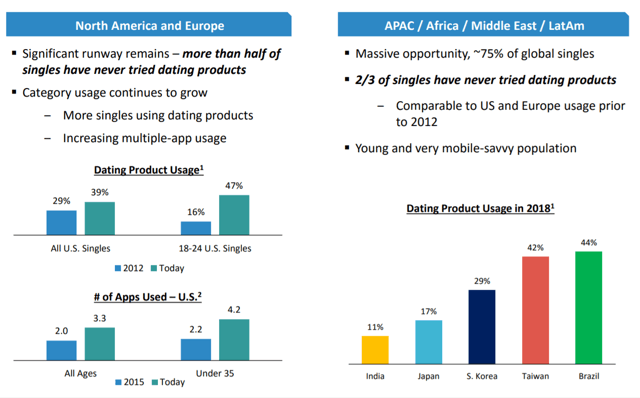 Another positive for the company is that I think it does profit from the network effect and the first mover advantage. Subscribers really appreciate security when dating and I think this is a real advantage for Match/Tinder. Tinder as a brand name is so well accepted that people now trust it.

If you look at the graph below, you can see that Tinder just blew every other dating product away. I think this is the network effect taking place; new users will download Tinder because it is the most popular app with the most reach and breadth which results in more users using it, etc. Classic network effect. Usually what you see is that the lead over competitors will only increase instead of decline, which is clear in the graph. 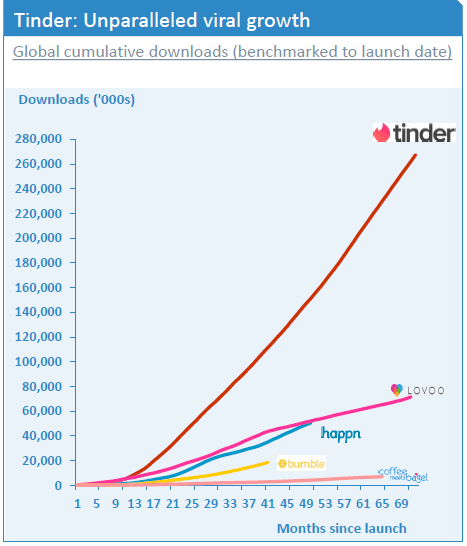 Also interesting to me is that Tinder introduced alternative sign-up in July 2017, which means that users create an own account instead of linking their Facebook account. From the data in the Q1 2018 investor presentation, we can see that since the roll-out in June 2017, almost 80% chose not to use Facebook login. 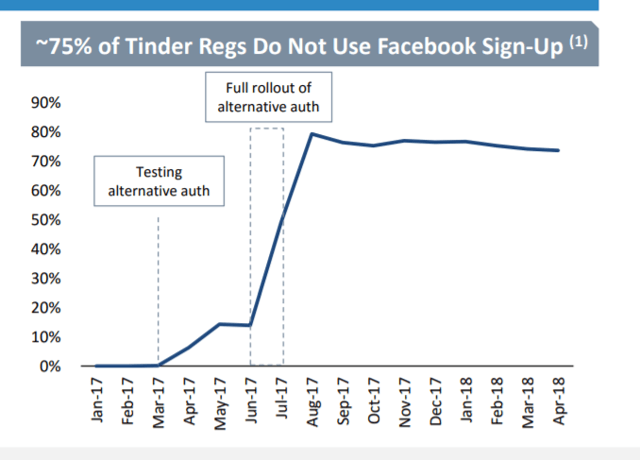 Conclusion: I think the potential Facebook competition is way overdone, because people apparently like to separate their Facebook life and their dating life. If 75% switched to non-Facebook login since 2017, I find it hard to believe that in 2019 everybody will switch to Facebook dating again. Also, Facebook dating has been available in several countries for a while, but has not affected Match Group growth rates meaningfully.

Match Group is an impressive company. The 2018 revenue growth rate was 30%, which tells us that growth is actually accelerating instead of slowing, as can be seen in the graph below. As mentioned the introductions of Tinder Plus (2015) and Tinder Gold (2017) have most probably ignited that revenue acceleration, as well as tapping the international markets which are larger than the Western markets.

Operating margins have steadily increased to 31% as well, because the business has profited from operating leverage. Naturally, this is because it’s a platform model, but also because marketing expenses as a % of revenue went down. Management had this to say in the 2018 annual report about this:

“As our mix has shifted toward younger users, our mix of acquisition channels has shifted toward free channels, driving a significant decline over the past several years in the average amount we spend to acquire a new user across our portfolio. As a percentage of revenue, our costs of acquiring Subscribers have declined.”

Furthermore, the company had healthy free cash flow of 555 million on a 2018 revenue of 1.7 billion, which is very solid. 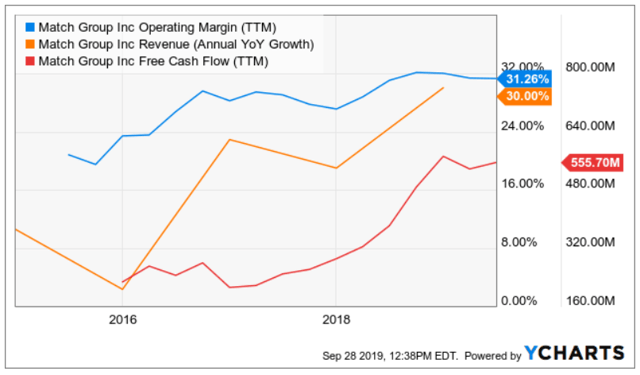 Match group currently has a TTM P/E ratio of 43 which is above the 5 year average. But it is important to acknowledge that a company that makes higher returns on invested capital earns a higher P/E ratio. This is indeed the case with Match, because revenue growth, operating margin and ROIC have been growing with the P/E. I have deliberately not included the ROE, as this will be higher just by increasing the amount of financial leverage on the balance sheet. Conclusion is that the P/E is higher than the 5 year average, but in relation to the growth and margins the company is making, I don’t think it is totally out of line, especially if you consider that growth rates will actually increase from here because of the untapped international markets. 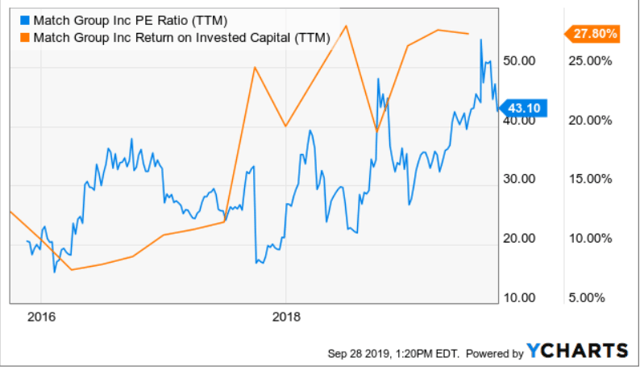 So should we invest in Match Group Stock? I think we do. Firstly, the company has showed very good management with the introduction of Tinder Gold and Plus, where it has monetized a target audience that wasn’t monetized before.

Secondly, we have seen with various platform models like Facebook and marketplaces in general, usually when one player in the market has a very big advantage, the lead will usually widen after a critical mass has been achieved. I think this is the case with Match. Tinder has made such a trusted brand in a very sensitive world that the lead in the market will actually accelerate.

Thirdly, the total addressable market is huge. As shown, this company can easily sustain its growth rates just by expanding geographically but also by increasing the penetration rates in developed markets like the U.S. and EU. The valuation is a bit pricey, but considering the outlook, owning these shares is not a bad idea.

Disclosure: I am/we are long MTCH. I wrote this article myself, and it expresses my own opinions. I am not receiving compensation for it (other than from Seeking Alpha). I have no business relationship with any company whose stock is mentioned in this article.