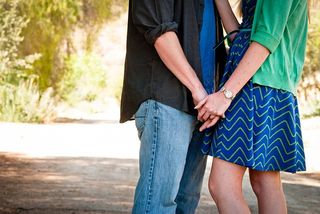 I’ve written previously about meeting Mr. or Ms. Right,, for example, The Relationship Report Card.  Its format was standard: a series of tips. But some people prefer advice in context, in a story, hence this article.

The doctor said it almost in passing: “Yup, your biological clock is ticking.” While Jen had suppressed that reality because Mr. Right hadn’t come along, this shook her into action.

Before, Jen had felt, “If it’s meant to be, it’s meant to be. I want it to happen naturally, not force it.” Unfortunately for her, “naturally” meant long-shots like hoping some great guy would start up a conversation in a bar or supermarket.

Worse, she had a thing for bad boys. She thought they were sexy and she liked that she might be able to reform him—but not too much because she didn’t want a boring guy.

Although she suppressed her desire to have kids, she had long felt a powerful desire to have at least one. So now, at 37, Jen was going to give it her best shot, indeed go all out.

So she went with her bestie Linda and a platonic guy friend, Ken, to Macy’s for a makeover. Jen browsed the cosmeticians and picked someone who looked a little like her and who seemed to know what she was doing: confident and quick as she was working on the customer.

As the cosmetician worked on Jen, Ken and Linda gave varying thumbs up and down and Jen got up happy. Before leaving, she decided to get herself a new dating outfit: She took seven things into the dressing room, got more votes from her team, and bought not one but three. Then Ken suggested she get some sexy nightgown “just in case.” She did.

The three of them went back to Jen’s place for a glass of wine and for Linda to take pix for Jen’s online profile. Jen had always thought that online dating was too studied an approach and that too many people lie about themselves—“They say they’re 40 when they’re 50 and use an old picture.”

But Linda said, “Just keep your standards high and at the first sign of jerkdom—before you even get to that 1st meeting at Starbucks, like he doesn’t respond to your email within a day—dump the fool.” That solidified Jen’s openness to posting her profile.

Indeed, she said, “I should get a professional photographer for the pictures.” Ken responded sarcastically, “Yeah, you’ll be natural with a pro there. Let me take ‘em.” And with Jen’s phone, he kept making her laugh by saying sex words as he took pictures.

She was able to be natural in front of her besties and picked one of the 16 pics she liked. She then changed into a different kind of outfit and 30 pics later, found another one she modestly claimed was “not bad” but actually loved. Then Ken said, “Change into the nightgown—Let’s get pictures of that!” “No!”

Jen had enough for one day but this time it was Linda’s time to exclaim, “No! Let’s write your profile and put it on a bunch of dating websites. Together, they came up with:

Stable yet fun, well-employed white woman 37 seeks male match for LTR, even (gulp) marriage and a baby or two. Intelligence, kindness, and responsibility are key. Nice but not crucial: You like doggies, dancing, and dinners. No-nos for me: not-self-supporting, substance abuse, temper, or extreme religiosity. Should we text?

Linda and Ken weren’t through yet. Linda said, “Let’s see your flirting behavior.  Make believe a cute guy like Ken is in the supermarket line. Flirt with him.”  After watching for a moment, Linda said, “Your posture sucks, you didn’t establish eye contact, and you stood too far away—2 1/2 feet is about right. And it couldn’t hurt, at the right moment, to touch a guy’s forearm. And remember it’s 2019 not 1950: It’s okay for a woman to initiate conversation. Ask about whatever, like, “How do you like that hummus in your basket?”

At that point, Jen kicked them out: “If I don’t, you’ll want me to sign up for a singles hike, cruise, and singles ministry.” Ken said, only half-joking. “That’s tomorrow. You said you’re serious about this. Let’s make it happen, girl!”

The next day, Jen actually did all three plus signed up for a dance class. She thought, “Yeah, it’s mainly women but a guy who likes to dance probably is someone who enjoys simple pleasures.” She also signed up for a financial planning course: “That’s something a responsible guy who has a few bucks might do. Besides, whether I meet someone or not, I’d like to learn more about how to deal with money.”

Would you bet on or against Jen finding Mr Right?

That story embeds at least eight tips for meeting a Mr/Ms Right (not just  Mr/Ms Right for Tonight):

Ready for love? Perhaps those tips will help.

This is part of series with self-help tips provided within the context of a story. The others are on procrastination, on time management. refreshing a stale relationship, and managing your money.