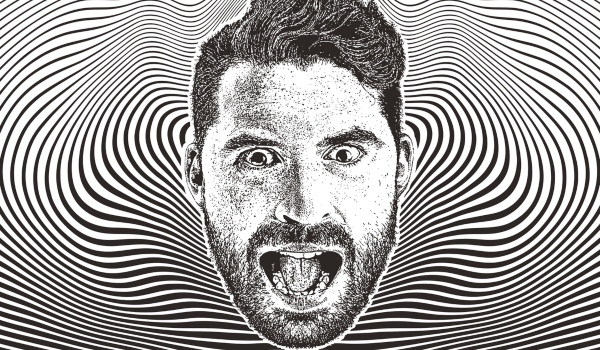 the magic bullet that’s going to transform shit for you because all it’s doing is making you goddamn miserable.

There are a whole lot of problems in going into a self-help overload, but part of it is that they’re selling a one-size-fits-all sort of solution, something that may work for a slice of people, but sure as shit isn’t going to work for everyone… assuming it works at all in the first place.

(As an aside: check out The1Janitor’s Youtube video “Is Self-Help A Scam” for a fascinating discussion on the industry as a whole.)

Right now, all you’re doing is letting all of this information — much of it either contradictory or just plain unhelpful — fuck with your head. All you’re doing is feeding your anxieties and insecurities because your confirmation bias is just telling you over and over again that you must be doing something wrong and it’s all your fault. After all, if these are the purported solutions to your problems and they’re not working… well, you must be especially fucked somehow, right?

Your biggest problem isn’t that you’ve been fucked by the fickle finger of fate, it’s that all you’re doing is looking for solutions that don’t meaningfully address the problems you actually have and you’re creating this fucked up false dichotomy for yourself based on other people’s beliefs that have absolutely no bearing on your life or lived experiences. In fact, you’re taking other people’s declaration as valid over the experiences you’ve already lived through.

One of the things you should always do when you’re looking for advice — whether it’s from me, Mark Manson, Captain Awkward, Dear Prudence, Dan Savage or literally anyone else — is consider their perspective and general philosophy on things. That’s always going to color not just their advice but their outlook on the world. I’m never going to send people to talk to Corporal MGTOW or something because their whole philosophy is functionally “it’s so HARD to be a hetero white man these days” and a whole lot of shit about how women are trying to steal your vital essences. In the case of Art of Manliness… well look, their whole thing is that they’re very much a “let’s get back to this old-fashioned, John Wayne style of masculinity” and a belief in very gender existentialist, heteronormative and very white forms of manhood. By their very nature, they’re going to be looking at a much more “traditional” idea of what men and women should want and should be. The problem is that this often runs headlong into the fact that this isn’t the 1950s anymore and most of the golden age they’re reminiscing about is more nostalgia-porn and myth-making than reality.

Take, for example, the idea that women want a provider. The reason why this dynamic exists and has existed for as long as it has is because for several hundred years, women weren’t legally allowed to provide for themselves. Shit, women weren’t allowed to have bank accounts until the 60s and 70s. So for a very long period of time, women who didn’t have generational wealth needed a provider because it was literally the difference between starvation and survival.

And even then, women have always wanted their own financial independence. The women in your experience aren’t exceptions, they’re much more of the norm than people accept or even realize. Women, and women of color in particular, have been working and trying for self-sufficiency, often because they had to.

Double points if he’s a “musician”.

Then there’s the fact that you’ve created your own imaginary nemesis..es… to compare yourself to. The guy with the seven-figure bank account who’s gonna swoop in and take care of the women you don’t want to provide and protect? He doesn’t exist. You’re not competing with him. He’s a figment of your imagination, built out of your anxieties and your fears that you’re somehow deficient or broken. And comparing yourself to folks you know is a mistake too. Let’s take your roommates, the “vagina whisperers”. Let’s say that it is exactly as you say: that they’re parading women in and out like they’ve figured out how to build a literal chick magnet. Here’s the most important question: is that what you actually want? Not “well, they’re getting any dates/sex/long, lingering deep-tissue massages”. Is that actually the sort of relationship you want and the type of women you want? Is that even the lifestyle you want? Or are you letting the fact that they’re having any success, for suitably variable definitions of success, blind you to everything else?

Social, sexual or romantic success isn’t a one-size-fits-all answer, either. It doesn’t do you any good to have a long string one one-night-stands with women you never see again when what you actually want is a committed, monogamous, long-term relationship. Getting envious of others when what they have isn’t even what you actually want or need is a great way to drive yourself crazy chasing after something that will never make you happy if you ever managed to catch it.

And then there’s the issue with Tinder and OKCupid. The problem there is as likely the fact that, frankly, online dating as we currently know it sucks and the way that apps try to curate the experience only makes it worse. The likelihood that your issue is as much about demographics and the way men and women use online dating apps is far higher than “well my face is just plain busted”. And even then, the solution would be “better quality photos”, not “may as well lie down and rot”.

Right now your main issue is that you’ve gotten yourself so twisted around the axle of your lack of dating success that everything is just going to end up making things worse. What you need right now — more than anything else — is to take a step away from all of it. Put away all the books and podcasts, let your apps go dormant and focus on getting your head right first. I mean, you only just found out that you’re dealing with undiagnosed depression and ADHD. That alone is going to go a LONG way towards explaining why you’re so angry and frustrated right now. It’s not because you’re a loser, it’s because you’ve been fighting through your brain chemistry and that is gonna both exhaust you and suck the joy out of… well, everything. Right now, even if you were to meet the woman of your dreams, you wouldn’t be in a place to make that relationship work because you’ve got a lot of (very understandable) negativity that’s spilling into the rest of your life. Getting that part of your life sorted out is going to remove one of the biggest and most important roadblocks between you and your future happiness.

But the other reason you need to take a step back is that your frustration is getting in your way. Think of it like getting stuck in Dark Souls or Sekiro — you keep dying over and over again trying to beat this ONE boss and it’s driving you up the GODDAMN wall because at least a third of the time, you can’t even get to the second stage of the fight. Hell, sometimes you can’t even get to the boss and you know you can do that, you’ve done that before so why in pluperfect fuckery are you getting ganked there?

Taking a break from that lets your frustration recede, lets your muscles unclench and you are able to just relax. Then, when you come back to it a day or two later, you smoke that boss like you weren’t even trying hard.

That is the whole point of “it’ll happen when you stop trying.” It’s not some woo-woo-I-read-The-Secret-too-many-times shit, it’s “I took a break and calmed down and came back to it when I was in a better place”. It’s the difference between walking and trying to jog when all of your muscles are tensed at the same time. You need to take a break from all of the desperate “Maybe THIS will fix me! OK maybe THIS. Ok, maybe THIS!” and find your zen. You want to get to a place where you’ve got your depression and ADHD reasonably under control, where you feel like your life is pretty good and that you actually have control, instead of feeling like you’re clinging to the back of a rampaging bull and you can’t relax for even a moment.

Then, once you’re ready — which may take a while, and that’s OK — start putting some serious thought into exactly what you want. What kind of relationship you’re looking for, what kind of person would be right for you and what you’re willing to do to make it work. When you have that in mind, then it’s time to start putting the effort into meeting people and seeing if their weird matches your weird.

Don’t worry about missing out or needing to make up time. That doesn’t exist. Love doesn’t exist on a deadline. Love will be waiting for you when you’re ready. Focus on yourself for now, and when the time comes… you’ll be ready to grab life by the horns and make it go where YOU want.

You’ll be ok. I promise.

All will be well.

Previously published on doctornerdlove.com and is republished here under permission.